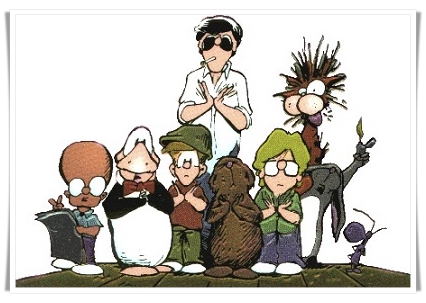 Back in the day, at least as the case may be concerning yours truly, the Sunday Dallas Morning News was where it was at, and while some folks went straight to the Classifieds or to the Real Estate sections, I – being an intellectual of the highest order (cough-cough) – went right to the Comics section. Or, as we called them those days – to the “funnies…”

And yeah, I’ll admit it, I went straight to Peanuts, and if Schulz was still around I’d still be reading about Chuck and Linus and Snoopy. Yet my most secret pleasure was located on or near the last page of the ‘funnies,’ and that would be Berke Breathed’s Bloom County. There are more than a few anthologies that cover Bloom County’s run, which, by and large, was limited to Ronald Reagan’s years in office, as well as Bush 41’s first year, so yeah, the 80s.

And yup, that’s the crew in the image up top. If this motley crew is unfamiliar to you, well, you have my sympathy, because the irony and caustic empathy found in Bloom County is in perilously short supply these days. I have heard that there is some sort of reboot to be found on Facebook, but as I am morally disinclined to even open a link from FB this reincarnation will remain my loss. Maybe a print anthology of the FB years will make it to a bookstore someday. And yes, I recognize the irony inherent in that last sentence and I apologize sincerely, yet my hope remains the same. It’s time to revisit Bloom County, and I hope you’ll give it a try.

I have tried to make the case recently that roughly 18 percent of Americans suffer from an undiagnosed schizo-affective disorder, and if you’ve been reading along you understand why. First and foremost, please understand that the APA (American Psychological Association) came up with those stats years ago, so cut me some slack, please; I ain’t just makin’ up this crap as I go, or at least I haven’t been…up to now.

But now, I feel it’s finally time to make up some shit, because I am beginning to think that a really large number of people in the United States are morons. Large – as in 50% or more of the population. Large, as in all those people who still think the Republican Party is, well, you know, somehow interested in good governance. Is that polite enough for you? Hell, everyone knows the Republican Party is all about the money these days. They worship the dollar – not some feeble-minded God, and now believe that the quest for excess wealth is somehow the defining characteristic of all morally superior men. They have become Ayn Rand fanatics, through and through. But first, let’s get some definitions out of the way.

This, from Wikipedia: “Moron” was coined in 1910 by psychologist Henry H. Goddard[4] from the Ancient Greek word μωρός (moros), which meant “dull”[5] and used to describe a person with a mental age in adulthood of between 7 and 10 on the Binet scale.[6] It was once applied to people with an IQ of 51–70, being superior in one degree to “imbecile” (IQ of 26–50) and superior in two degrees to “idiot” (IQ of 0–25). The word moron, along with others including, “idiotic”, “imbecilic”, “stupid”, and “feeble-minded“, was formerly considered a valid descriptor in the psychological community, but it is now deprecated in use by psychologists.

And let me be clear. I’m in no way stating that you can only find such high percentages of morons only in the USA. No…they are everywhere, they breed like rabbits and they all vote. When Elon Musk and Jeff Bezos say they want to get the fuck out of Dodge, what they’re really saying is they want to get away from all the morons.

Well, Texas, Florida, and Mississippi each have Republican governors, and while the case can be made that all three of these politicians is a moron, the State of Alabama has a governor that requires special mention, as she is now headed straight for the Morons Hall of Fame, otherwise known as the 2024 Republican National Convention.

Kay Ellen Ivey is a class act, a Republican through and through. Refusing to take federal funds to expand Medicaid (which provides medical insurance and other assistance to the poor), she worked hard to make sure that even the disabled making less than 200 bucks a month have to work at least a part time job to get any form of public assistance. She’s worked equally hard to speed up executions in her state while making it almost impossible for a woman to choose to have an abortion – a dichotomy I have never been able to wrap my head around. And up until late last week, Ms. Ivey was a first class peddler of vaccine disinformation, not to mention the architect of a whole bunch of laws that prohibited mask mandates and other “common sense” measures to halt the spread of Covid-19.

Well, at a presser on Friday, Governor Ivey stated that the Covid-19 pandemic is now a “pandemic of the unvaccinated,” which means what, exactly?

Well, it means that the State of Alabama has one of the lowest rates of vaccination in the US, and that almost all the hospitals in the state are reaching, or have reached, their breaking point. Their ICUs are full – of Covid-19 patients. And asked why this was so, Governor Ivey said she just didn’t know. And asked what people ought to do, she said that the Citizens of the Great State of Alabama should exercise a little “common sense” – and get vaccinated.

Truly, in a sane world you just can’t make up shit like this and get away with it, but Ivey is on MsNBC and on FOX saying this stuff with a straight face. And I’m here to tell ya, ladies and germs, that this woman has exactly what it takes to be the next Republican nominee for President of the United States.

You heard it here first.

Several years ago I wrote here about PPO2 studies (also referred to as PatO2) aka: atmospheric partial pressure of oxygen, which in the realm of climate change science this is the real doom and gloom branch. The last paper I read on the subject came out on 2016 and it’s a real page turner (not) though worth reading (LOL) titled The human physiological impact of global deoxygenation. Obviously, with a title like this, this work is a complete fabrication and just one more twisted maze of clever disinformation put out by the Fake News Network – in this case The Journal of Physiological Sciences as made available through the National Institute of Health (US).

If you are a SCUBA diver you learned all about Dalton’s Law and partial pressures in your Basic Class. If you are not a SCUBA diver about all I can say is “Why not?” Anyway…the basics: the amount of oxygen in the air we breathe is roughly 20.95% (or 209,460 ppm), and if this partial pressure of oxygen in our atmosphere falls just far enough I want you to visualize one thing for me. Imagine pulling a fish from your favorite lake or river. Now, imagine this fish trying desperately to remain alive, flapping around as it tries to get enough oxygen to flow over its gills. The fish is flapping around because the partial pressure of oxygen in water is quite different from the PPO2 in air, and after a brief struggle the fish is either returned to the water before it dies or is taken home to be fried up for dinner.

Or take another example: If you travel to someplace at a very high elevation the reason you might experience “altitude sickness” is because the PPO2 is quite different at sea level than it is at, say, 14,000 feet above sea level. The good thing about this effect is that if you can remain at that altitude your body will slowly adapt to the new conditions, assuming you live long enough, that is.

Well, now, the good news. The PPO2 is falling, and greenhouse gases are the culprit, but earth’s atmosphere won’t be completely deoxygenated for approximately 3500 years. The not so good news is that the process is already well underway, and sometime in the not so distant future life at sea level will be similar to what life is like at 15,000 feet above sea level today. And, oh yes, the human fetus cannot, generally speaking, reach viable maturity under such conditions.

Well, enough of that. If you want to read the article, here it is.

The limits of growth

That’s the title of a book that’s sold more than any other – in the climate change pantheon, anyway. And the publisher, such as it is, is an organization called The Club of Rome, and if you are unfamiliar with this group you should read up on them. The original paper was, however, authored by a group of scientists at MIT – the Club of Rome simply published the work.

Now, in new work reported in today’s Guardian (Yep, it’s bleak, says expert who tested 1970s end-of-the-world prediction, by Edward Helmore, The Guardian, 25 July 2021) states that a major new study has validated much of the work in The Limits of Growth, and that civilization as we know it will collapse by 2040.

In what I would call a companion piece, after reading this essay in The Atlantic (After 11 Minutes in America, I Got Hit by the Crime Wave, by Graeme Wood, The Atlantic, 22 July 2021) I was left reeling, breathless and reeling, and in the most horrible way imaginable I was transported deep within the tortured landscapes of this song.

Y’all be careful out there, and thanks, Bill, for being there when I needed you most. 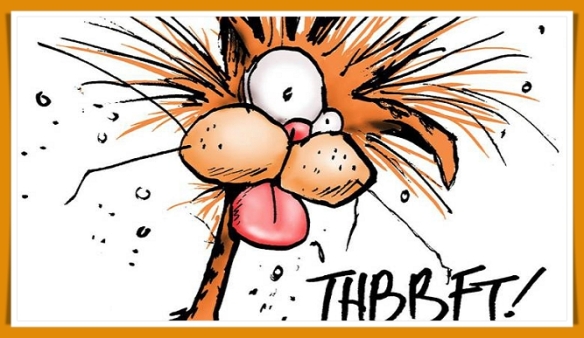 BILL THE CAT – FROM BLOOM COUNTY