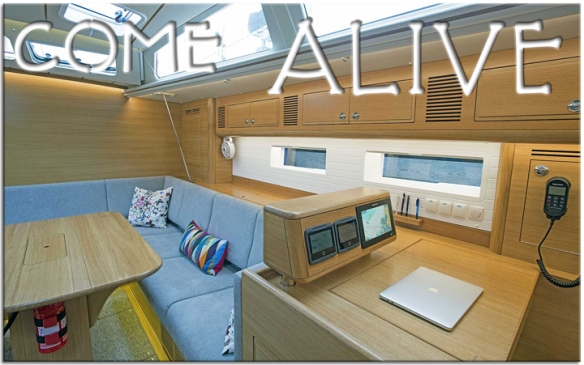 A few more words to soothe the savage beast.

Henry was sitting up on his berth, resting on a pile of pillows behind his back and neck and trying to ignore his iPhone. New text messages were coming in left and right and he knew he should read them all – but while a few were supportive more than one had been annoying. Friends from high school, a roommate from college, people he’d worked with…somehow word had slipped out that he was on the way out and people he hadn’t heard from in years suddenly had his email and text addresses.

Then an email came in from an address he wasn’t expecting, one he hadn’t seen in years, the ex-head of the team he had consulted for at Boeing: “Henry? Can you give me a call?”

No number, no other identifier, so Dr. Collins must be using the same number he’d always used. He went into Contacts and found the listing, then hit send.

“Yessir. What can I do for you today?”

“What the hell is S.V. Time Bandits?”

“That’s what came up on my screen. I mean really, Henry…Time Bandits?”

“So, you steal the name of my favorite movie and use it for your boat? That figures.”

“Didn’t your dad have a boat with a name like that?”

“Piffle…that’s almost as bad. Your mother was a physician though, if I recall correctly.”

“Well, that must be where you got your brains.”

“You’re probably right about that, sir.”

“I can imagine. I’ve also heard some weenie waggers from the Naval War College are after you. That true?”

“Yessir, but they’re pretty harmless, really. At least so far.”

“I just need to know, Henry. You haven’t told anyone, right?”

“No sir. I’ve left all kinds of decoys out there, but nothing substantive.”

“So we don’t have anything to worry about on our end?”

“Just one thing, sir. I had a visitor a couple of nights ago. A sphere, but not from the Hyperion Group.”

“About a foot in diameter, translucent and reflective at the same time, and with some kind of electrical activity just visible inside.”

“Sir? You know about this one?”

“I take it that means yes.”

“Yessir. And they seem to have the ability…”

“To index our brains. Access our memories. That was our impression, too.”

“What about Dink? What does he know about them?”

“Vicious. That’s how he described them.”

“Great. Lockheed did that one, right? So, anyone know why they’re picking on me?”

“Would you like me to call if they show up again?”

“No, we’ve got that covered now. You just take care, Henry. Oh, mine is in the pancreas, so I’ll be seeing you soon enough.”

“Sorry to hear that, sir. And before I forget, and I think they drew blood while they were here.”

“Pretty sure, yes. Both me and my dog. The puncture was pretty crude and both are showing signs of infection.”

He heard the old man breathing hard, then talking to someone in the background, then: “Henry, call me in an hour at the Beta number.”

“Yessir,” Taggart said, but by then the line had already gone dead.

“What was that all about?” Tracy said, coming into his stateroom and carrying a cup of tea.

“Ah. Have you heard anything from Anton?” she asked as she passed over the cup.

“They had to sit out some weather in Copenhagen. Heavy ice over southern Norway, but they’re up again and due to arrive at Bergen in about an hour.”

“Is that the cardamom?”

She smiled. “You want to try to eat something today?”

“Mom wants to put up a Christmas tree…”

“Of course she does.”

“No, that’s not gonna happen. A little one will fit on the chart table, just make sure she doesn’t scratch the wood with some kind of bullshit stand.”

She nodded. “Okay. Now the big question…what do you want for Christmas?”

He chuckled at that. “Oh, right,” he grinned, “well, let me think. Actually, I’ve been a pretty bad boy this year so maybe you ought to bring me a few lumps of coal…”

She laughed. “Ya know, I just knew you were going to ask for a Bulgari chronograph.”

“And my guess is Anton planted that seed, right?”

“Russians have a thing for Bulgari. Maybe you’d better run out and see if there’s one around here. That would blow his mind.”

“Why not? I ain’t taking any of it with me, Tracy, and seeing the look in his eyes will be worth the price of admission.”

“I suppose you have stuff for everyone else?”

Tracy screamed and jumped away from the orb.

“That’s what you said last time…”

“Would you, uh, close the door on your way out?”

“This is going to be personal, kiddo.”

Tracy seemed a little offended, but she backed out of his stateroom, closing the door as she went, and as soon as the latch clicked Pinky materialized on the bed. She reached out and rubbed Clyde’s head, but her eyes never left his.

“Let me see the wound,” she said, and he held out his arm. The area just around the puncture was bright red now and raised a little, and after she felt his skin she produced a little bag and took out some tape and wrapped it around the area. “Where is the one on Clyde?”

Henry felt for it then held it out for her to examine. “Right here,” he added.

She taped that wound, too. “It will take several hours for this to work, but you will feel very good for several days before the effect wears off.”

She shook her head. “Not well, but he is still, what do you call it? Sharp? As a tack?”

“Yup. This other group? Are they going to cause any problems?”

“But the rest of the group?”

“You are the first they have tried to hurt. I doubt you will be the last.”

“What was it?” Henry asked, looking at his arm.

“More than likely a genetic weapon that is, we assume, supposed to bring on rapid onset dementia.”

“How sweet. I wonder why they hit Clyde with that stuff?”

“They have no idea what dogs are capable of, so I would assume they were just being thorough.”

“Like grayish-brown lizard-people, only about a foot tall. And oh yes, and they shit out their mouthes.”

“Yes, so don’t ever get into a shouting match with one of them.”

“Henry, I must warn you. You are going to feel very good for two, maybe three days, but then the bottom will fall out. Do you understand?”

“Now, one last question. When you first saw them, where was their sphere?”

“Underwater, just off the back of the boat? Like an eye…”

She shook her head and stood semi-erect. “Damn. I must go now, but I will be back tonight, after everyone has gone to sleep” – and then in the blink of an eye she was gone.

He took a sip of tea and called out for Tracy; the door opened instantly – so she had been listening to everything they said.

“Do you think Anton could make me an omelet?” he asked.

That caused an eyebrow to arch. “You sure?”

“Yup. And when you head out to look for that thing for Anton, see if you can rustle up some Viagra while you’re at it…”

© 2021 adrian leverkühn | abw | this is a work of fiction, pure and simple; the next element will drop as soon as the muse cooperates.