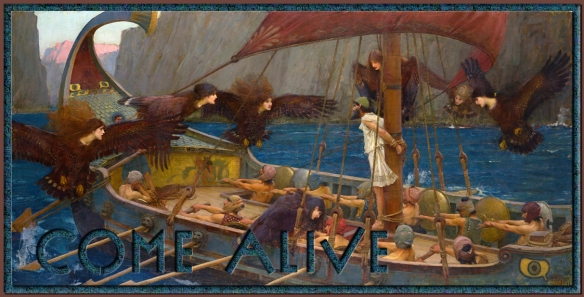 And a little music to lead the way through this very short snippet.

The wind tore into the Swan, pushing her bow to port despite Henry’s trying to keep her dead into the wind. Yet even as she fell off the wind he began to feel her rolling – and he saw that sudden, all-consuming panic in Rupert’s eyes. He ignored all fear now as he looked at the apparent wind speed gauge – which was pegged at 110 knots, the maximum the gauge could display, and his intuition said to turn back into the wind, yet he knew that as the boat rolled the rudder would become less and less effective, so he turned to port, hard to the left, and the Swan began to settle down on her lines again – and to pick up boat speed, too.

Fifteen seconds later the wind speed dropped to 30 knots, then to 25, and he pinched up as best he could, turning back to their baseline course – and into a very confused sea…

…the he saw the other boat, still about a half mile away…

Her keel had snapped off and she was sinking, her crew was flailing in the water surrounded by debris.

It was against race rules to use the engine for anything but battery charging, but right now the rules didn’t matter. He reached for the ignition switch and preheated the engine, then hit the starter.

“Henry!” Rupert cried. “What the hell are you doing!”

“Pete!” Henry called out, ignoring Rupert. “Get on the SSB and put out a Mayday, advise we are coming to the aid of a sinking vessel and that their are people in the water!”

“Sheesh. Test pilots. Nothing seems to excite them,” Henry muttered. “Rupert, stand-by the Life-Slings and get somebody on the bow to point out people in the water.”

He waited for the engine to warm a little then pushed it to the redline, but even so he guesstimated it would take the Swan about 20 minutes to get to the debris field…and to all the people there.

“Rupert! Get the main up, one reef, and the high-clewed yankee…get that up too…!”

Henry saw the other boat’s hull slip under the waves and he checked his boat speed against the ten foot waves she was powering through, and he immediately realized it was gonna be a close thing…probably too close.

Then he saw a tall black dorsal fin slicing through the water, and then the eye of his friend looking up at him from the sea right beneath the cockpit.

“Rupert! Get back here and take the wheel!” Henry called out to the foredeck – just before he set the autopilot and jumped into the sea…

Edith met them in the lobby of the Grand Californian and they walked directly into the park from the hotel, then she took them over to the 33 Club for lunch – Monte Cristo sandwiches and mint juleps were the order of the day – and Mike was astonished by the change that had come over this fire-breathing hell-bitch. Unabashedly genteel and genuinely helpful now, she now apparently wanted nothing more than to see to it that Anton had the time of his life.

And Anton, for his part, was more than happy to go right along for the ride.

It hadn’t even been four months since he’d been piloting a Sukhoi over the North Sea, locked in mortal combat with an American F-15…and then, in an instant…his entire world had disappeared…vanishing inside the heartbeat of the last world war the earth would ever know.

Then he’d been drifting towards the sea, a little boat fleeing Rotterdam below his dangling feet, then a surreal rescue by Henry Taggart – and that whale of his.

And now here he was, inside one of the most exclusive reserves of the American über-wealthy, with a most attractive American female while enjoying food that had heretofore been something beyond his wildest imaginings. And because of Henry Taggart, he was himself now more than a little wealthy, too.

“What strange world,” Anton sighed as his mind roamed.

“I think of Genry. How he save me with whale, how whale was friend. And now here with most amazing beautiful American girl, in place where grandchildren dream of come – of coming to. I am sad, but happy also. Sad for grandchildren. All the grandchildren who never know this place. Happy see this with own eyes so tell when see in heaven.”

“They call this the happiest place on earth,” Edith added. “Maybe there’s a reason for that happiness, Anton?”

Anton nodded. Mike, however, looked out over New Orleans Square and tried to imagine the cash flow.

“When was the last time you and Henry came here, Edith?” Mike asked.

She fell into the trap, she was quite helpless not to, really. “Henry and I? Oh, that was many, many years ago – so many I can’t remember when exactly,” she lied – but despite the evasion she thought back to the last time they’d sat up here in this very dining room, her emotions now, as then, framed by the very same elegant French hardwood paneling on the walls, and all the doors open to the same square below…to that afternoon when she had told him about all her little murders – and how he had run away from her then…and how he had never really stopped running from her, not once – and certainly not even now.

© 2021 adrian leverkühn | abw | this is a work of fiction, pure and simple; the next element will drop as soon as the muse cooperates.